Guide to reading : Below are, not one but, three completely unrelated short stories all bound by the one word ~ “Sea”. 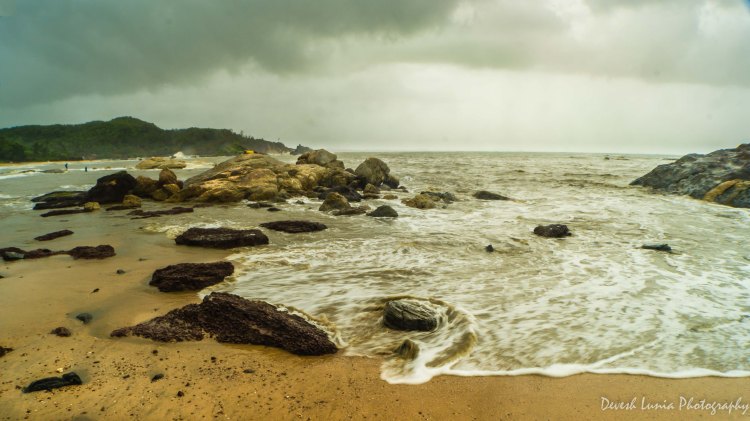 He walked towards the seas. Stretched far across till where his eyes could see, only blues greeted him, shimmering in different shades from azure to teal to royal blue with hints of cyan and turquoise pitching in! This was the quieter part of the beach. Not many residents came here. And tourists? Barely. He dropped the bag and slowly moved to the edge of the rocks. As he looked down at the lapping waves twenty feet below, a rush of excitement passed through him. Goosebumps lined up his arms. He took in a lot of air, breathing deep. It would be a while before he did that again. “Whenever you’re ready,” he heard someone shout. He looked across to the adjacent cliff. Nodding, ever so slightly, he gave the clique of photographers a thumbs up and then spreading his arms like those of an eagle’s, he swooped down on the water, cold air rushing past him and all of reality a mere joke in that moment of truth!

“Mom, be careful. The baby might get hurt,” my daughter warned me, as soon as I set the toddler on the sand. I smiled at her, nostalgia hitting me in my guts! Twenty years ago, my little girl was perched in my lap eating her way through sand more than playing with it. She ran across the sands, collecting shells, screaming with delight at wriggling snails. Crabs scared her. Starfish made her curious. Corals were her collectibles. I still had some kept in one of my boxes. I scooped up the kid in my arms. “Are you stronger than your mother?” I asked him. But he was fiddling with a coral in his hand. He curiously stared at it and gurgled “Ma”, the best way he could, showing the coral to me and his mother turn by turn. “Oh well, let him out on the sand. He’ll be fine!” said my daughter, possibly reminiscing her own coral days! “But we’ll bathe him once after,” she said, as soon as I put the kid on the beach where I had raised my family and my husband’s mother had raised hers and so on. We were the sea and sand people. You couldn’t take the salts of the seas out of our blood.

He needed to talk to someone. His brain was a flurry of thoughts. Everything was going wrong. He was screwing up whatever was left in his life after having lost all that he once had. He got out of his car. He closed the door lightly. His girlfriend’s banging of the car door still reverberated in his ears. Walking along the beach, he saw a girl sitting alone. Hoping it would not be a mistake, he went up to her and asked politely, “Do you mind if I sit here?” She looked up at him. Her tear streaked cheeks glistened in the soft lights. “It’s a free country,” she said, resignedly. He sat down beside her. He cupped up the sand and watched it flow out of his hands, tears rolling down his cheeks. “I don’t want us to be running out of time,” he said out loud to his girlfriend. “And if you go away, this is all I’ll ever be,” showing her his now empty hands. “You cannot love me so much. You should not,” she said, putting her hand in his. “The sands of time will take care of us. Just let them,” he pleaded. She sighed, didn’t say anything, but let her hand stay right where it belonged.